Wang Jianlin: The future of world film market is in China 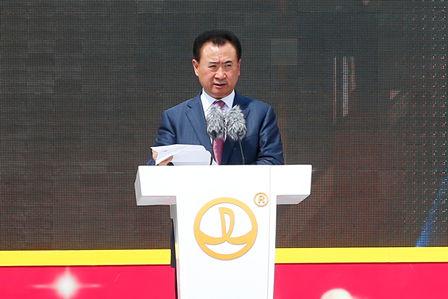 Following is the speech made by Wanda Group Chairman Wang Jianlin at the launching ceremony of the Qingdao Oriental Movie Metropolis.

On this beautiful sunny day, we are gathered here for the launching ceremony of the Qingdao Oriental Movie Metropolis. On behalf of more than 90,000 employees of Wanda Group, I would like to first express our warm welcome and heartfelt appreciation to all of you!

Qingdao Oriental Movie Metropolis is a major measure to implement the national policy of building a cultural power, a major strategy for Wanda's cultural industry development, and a major attempt to create China's global cultural brands. Once its first phase is completed in June 2016 and get the approval of the government departments, Wanda will host Qingdao International Film Festival with full support from the State Film Administration, Qingdao Government, China Film Association, AMPAS, and the world's top four talent agencies CAA, WME, UTA, and ICM. Wanda has the confidence and ability to elevate Qingdao International Film Festival to the world's top five international film festivals within three to five years, thereby changing the status quo of China's lack of global film brands.

Based on my conservative estimate, China's film box office revenue will surpass North America's by 2018 and will double it by 2023. It can be said that the future of the development of the world film market is right here in China. I am able to put it this way both because of China's 1.3 billion gradually affluent population and because of the annual industry growth rate of over 4,000 quality movie screens. Those in the world film industry who realize this first and are among the first to cooperate with China will be the first to reap the benefits.

Here I would like to express my thanks to the State Administration of Radio, Film and Television for its support for this project, and to the party committee and government of Qingdao for their great support. I especially would like to thank Ms Isaacs, Mr Koch and Ms Hudson. Thanks to them, for the first time in 86 years AMPAS has decided to throw its support behind Wanda in hosting an international film festival outside the United States. I would also like to express my thanks to the top four entertainment talent agencies CAA, WME, UTA and ICM, and to 索尼 Pictures, Warner Bros. Entertainment, Universal Studios, Paramount Pictures, Lionsgate Films, and The Weinstein Company for their support. I would also like to thank Mr. Leonardo DiCaprio and all celebrities for your coming here to attend the ceremony.

Next： Wang Jianlin: Let Chinese films go to the world