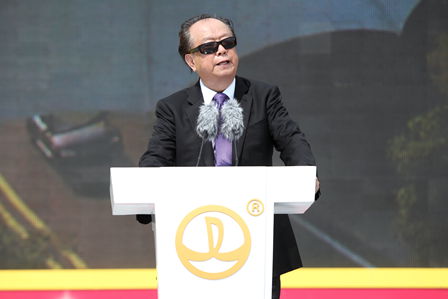 Following is the speech made by China Film Association Chairman Li Qiankuan at the launching ceremony for the Qingdao Oriental Movie Metropolis.

Wanda Group is a leading private enterprises and creator of China's film history. By establishing its cinema chain in 2005, Wanda is one of the first Chinese private enterprises establishing cinemas. By 2009 Wanda Cinema had already ranked No.1 in the country in terms of box office revenue. In 2012 Wanda acquired the world's second-ranked AMC Theatres in the United States, thus becoming the world's largest cinema operator and paving the way for Chinese films to go to the world. While consolidating its film screening business, Wanda is now entering film production to create a complete film industry chain, and is poised to become a pivotal giant in the world film industry.

Whether in terms of investment, scale or grade, Qingdao Oriental Movie Metropolis is an unprecedented project that will create history as it represents the highest level and the future of the development of contemporary film industry. In addition to its world-class hardware, this project has won recognition from many global film giants and domestic film producers, and many domestic and foreign movies will be shot here after its completion. Even more gratifying is the fact that the Academy of Motion Picture Arts and Sciences (AMPAS) will support Wanda in hosting Qingdao International Film Festival. It is high time China had a film festival with international standing; it is a dream for all of us in the Chinese film circle. We have reasons to believe that Qingdao International Film Festival will soon become a global cultural brand. Once it completes construction, Qingdao Oriental Movie Metropolis will not only become a center for China's film industry but also a center for the global film industry.

As a seasoned film professional, I feel very proud of such a great film and television industry project being conceived here in China, and I also admire Chairman Wang Jianlin's courage and determination. If we have more enterprises like Wanda, China will definitely achieve its dream of building a film power! Finally, I would like to wish Qingdao Oriental Movie Metropolis every success.

Next： Wanda to build cultural tourism city in Wuxi