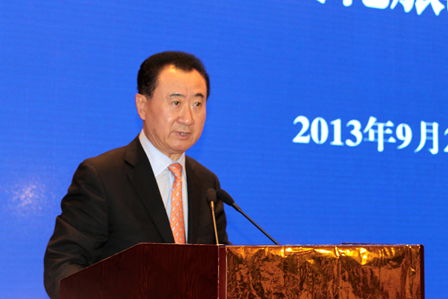 Located in Binhu District, the project covers 140 hectares . Out of the 30 billion yuan total investment, 21 billion yuan will be allocated to cultural tourism projects. It is expected to accommodate about 20 million visitors annually.

The Wuxi Wanda Cultural Tourism City will integrate cultural, tourism, commercial and hotel projects into one.

The cultural development will include a large stage show, a film park and a film city. The stage show, featuring Wuxi's local culture, is directed by world's famous theater artist Franco Dragone. The film park has a 3D motion theater where visitors take a 6-DOF dynamic seat to enjoy a stimulating experience in a three-dimensional world. At the 3D interactive cinema "Legend of Heroes", visitors slug it out with virtual monsters.

The City will also include a 120,000 sqm commercial center which acts as an axis of the whole project. The hotel area will cover 40 hectares and include a super five-star hotel, a five-star hotel, two four-star hotels and three themed hotels. The hotels combined will have 3,500 rooms. The bar street will include more than 20 famous bar brands from China and overseas. .

The project is expected to create 30,000 job opportunities, generate over 500 million yuan in annual taxes and produce annual revenue of 6 billion yuan.

Upon completion, the project will greatly promote Wuxi's brand value and elevate Wuxi to one of the world's famous tourism cities.